Giant-Size X-Men #1 contains thirty-seven pages of story. Over the course of these pages, we’re introduced to four all-new Marvel superheroes, who are joined by character who previously appeared in other comics (mostly Uncanny X-Men issues, aside from Wolverine, who famously debuted in the pages of The Incredible Hulk). These characters assemble back at the home page of the X-Men, where they meet Cyclops and are brought up to speed on the reason they have been brought together. After accepting a mission to track down the original X-Men, they travel to the island of Krakoa, where they spend eight pages fighting killer plants, crabs, and birds. After discovering the missing mutants, we learn in just over the span of a page that Krakoa is actually a mutant who possess a “colony intelligence” and feeds on the energy of other mutants. The original and all-new X-Men join in battle against Krakoa, and Professor Xavier swoops in to defeat “The Island That Walked Like A Man.” The book’s closing panels highlight the question on the minds of most interested readers by this point: “What are we going to do with thirteen X-Men?” In Uncanny X-Men #94, this question is immediately addressed and answered in the span of five pages, as the team’s roster quickly goes from thirteen to seven.

We’re nine issues into House of X and Powers of X, and the book has come to feel like a series bible that Marvel decided to illustrate and then publish at a rate of around five bucks a pop. Things have happened in these pages, but the most interesting stuff is the stuff that hasn’t happened yet. I could stop here and make that old joke about how jazz is about the notes you don’t play, man. But these notes seemingly will be played, by a range of artists, over the next few months and years, depending on how long Marvel decides to let this particular X-Men story run its course. It’s very careful, self-absorbed franchise building that takes itself a little too seriously, so it’s likely the kind of thing that will work its way into the cinematic universe in a matter of time. It does feel more and more like the MCU is pulling the comic books into directions that are cinematic to a fault: carefully calculated, slowly-paced acts of magical realism with a little too much grounding in Hollywood storytelling, so things tend to seem more formulaic in the stories themselves once you’ve cut through all the marketing and hyperbole.

Jonathan Hickman and his collaborators have been busy building a better future for Marvel’s mutants. Krakoa is now its own nation, recognized by the U.N. A significant portion of the universe’s earth-dwelling mutants, good, evil, and otherwise, have taken up residence on the sentient island, with Apocalypse the most notable convert to the cause of Xavier and Magneto (and Moira X, presumably, though she remains missing or unidentified). And, in perhaps the most dramatic turn of events revealed in this issue, Xavier and his followers have conquered death, thanks to a convoluted plot device involving a collective of supporting cast members and an instance of magic-via-technology involving Cerebro.

The most interesting stuff for me will be seeing how and why things fall apart. Apocalypse, Exodus, and Mr. Sinister are roaming Krakoa, among many others. The powers of resurrection possessed by the X-Men are connected to “The Five” (ugh), painting targets on each of their backs as we wait for their inevitable dissolution (or revision; this issue suggests that other combinations of mutants may also prove effective). The “Resurrection Protocol” hints at ways in which the noble pursuit of rebirth may be corrupted; duplicates may inadvertently or maliciously be created out of stored DNA and mind records, for instance. Reference to “FORCE conventions” possibly hints at occasions where “normal” protocols are suspended. Given the interest in archival records and preservation management, one could imagine a context in which an earlier, “uncorrupted” version of a mutant’s mind or DNA makeup might be selected in lieu of the last copy pre-death. Minds could easily be reset to versions more compliant with and accepting of the new world order advocated by these All-New X-Men. Wakanda’s refusal to accept a trade deal with Krakoa acknowledges current Marvel continuity and also potentially sets up an Avengers vs. X-Men 2.0 scenario with Black Panther (one of Hickman’s favorite Avengers) leading the charge.

It’s likely that some of this deception and subterfuge is already underway. Is Moira missing because she wanted to deviate from the playbook written by Xavier? Is Destiny missing because Moira wanted her killed for knowing too much? When the book presents us with a silent, dramatic, extremely telegraphed image of Xavier right after Magneto says (in italics!) “They should have killed us all when they had the chance,” are we being led to believe that Magneto has already been killed and replaced? And in the previous issue of Powers of X, it was implied that a version of Mr. Sinister who had not been mind-wiped by Xavier was roaming around somewhere. Mystique has seemed previously suspicious and uncooperative. Jean Grey’s comment in this issue that she’s “the only ‘me’ that ever was” is also a bit ominous.

Many of the more interesting dimensions of this strange new world and the possible directions we might head in are described at greater length in pages with text and visualizations. And many of the pages of sequential art often confirm or recount information previously gleaned from prior text pieces and visualizations. The closing splash page of this issue features Xavier shaking hands with Apocalypse, a moment meant to signify something really big and dramatic. But by now this joining of forces has seemed all but inevitable, so for me this sequence lacked the weight its staging seemed intent on carrying. We get five pages (!) of dialogue setting up what feels like a foregone conclusion.

We also get a two-page sequence between Emma Frost and Xavier at the U.N. that, I guess, is supposed to make visible the lengths Xavier is willing to go to make his future a reality. “Dominating the will of another…often comes with a cost.” This sequence is thick with foreshadowing, leading either to the revelation of Xavier’s own manipulations, or the lengths Moira X has gone to in order to govern the will of Xavier himself, or some combination of the two. Here as well, the prologue meanders on as two characters armchair philosophize about the way of the world. See also: the book’s opening sequence, in which Magneto comes dangerously close to the “we live in a society” meme. I wish this book spent less time impressed by its own alleged galaxy brain thinking and more time showing us the characters inhabiting this new world order, interrogating its terms, conflicting over approaches, all that Chris Claremont stuff that I’ve come to view more and more as the most important parts of the X-Men’s genetic makeup.

We also get all the stuff with “The Five,” who, we learn, are “an inseparable family unit” due to their status as “cultural paragons.” Hickman’s tendency to will such readings into existence materializes in the pages where the assembled mutants of Krakoa join voices in asserting their mutant-ness. The resurrected X-Men are presented to the congregation, all-new and all-nude X-Men (sorry), complete with a panel where Nightcrawler’s tail conveniently conceals all traces of genitalia. God forbid. Storm leads their ritualistic return to the fold, and we get the sense that she has officiated these sorts of events before. It’s unclear why Krakoa has adopted and embraced these pseudoreligious customs, why Storm is in this role, why “The Five” operate openly instead of in secret. I’m sure more sympathetic readers can explain these things to themselves. The whole sequence feels a bit embarrassing and self-congratulatory, to be honest. If there’s meant to be an ominous and foreboding tone to this stuff, the artwork isn’t pulling that off. This ain’t The Righteous Gemstones, that’s for sure.

Hickman’s work in this series often reminds me of more compelling speculative fiction elsewhere. For example, the resurrection protocols remind me of Frank Herbert’s original Dune series and the ballad of Duncan Idaho, the loyal defender of House Atreides who dies in the original book, only to be “revived” as a series of gholas in later novels. I would love it if the X-Men were more like Dune, but we’ve got a ways to go in a book that spends more time explaining how the Brian Michael Bendis half-note character Goldballs has actually been throwing eggs at everyone this entire time.

Hickman and his collaborators are clearly interested in using the many and varied parts of the expanded X-Men Universe: “The Five” are mostly also-rans, many of whom were recent creations who might, in other circumstances, have been ignored or forgotten in an ambitious franchise reboot. The arrival of the X-Men’s sizable cast of villains and antiheroes leans heavily on characters recognizable from the late 80s / early 90s era and the animated series: Exodus, Sinister, Marrow, Emplate, Random (!), Wildside (!!). These investments suggest that Hickman clearly enjoys or finds plenty to work with in the post-Claremont creative output (in addition to picking up some long-running plotlines and character traits), but I also get the sense that he is setting himself up as the Claremont heir apparent, the one who will restore the X-Men to their previous creative heights and shepherd this cast through a seminal epoch. It’s good to see that kind of confidence in your creative team, but I’m eager to get beyond the stuff that sets the stage.

Questions? Comments? Jim is on Twitter @JimMc_Grath (for more academic approaches to comics, pop culture, and media studies) and @poolhalljames (if you’re more interested in out-of-context panels from comics, bad memes, and live-tweets about professional wrestling). You can also email him: jameskennethmcgrath[at]gmail[dot]com

View all posts by Jim McGrath 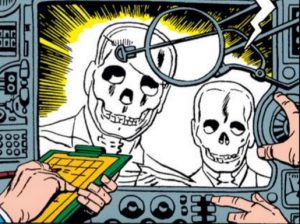